I am in Galicia!! 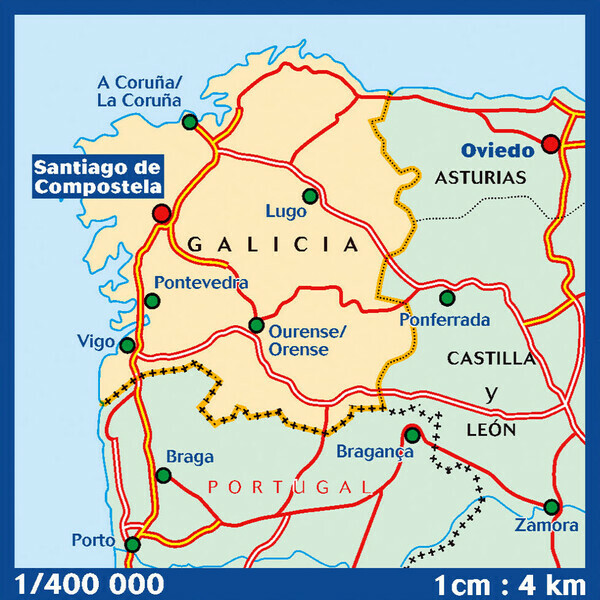 So much has happened since we last spoke. But before I get into how I got here physically, I want to speak about some of the things that have been taking place internally as I have been walking the spiritual part of my journey. I promise to tell you about places and people and terrain the next time I speak with you. 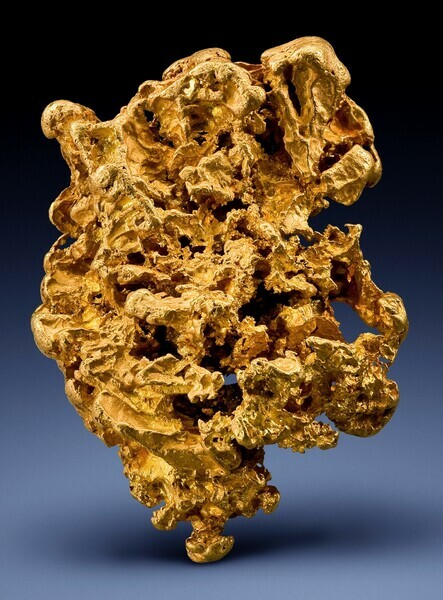 In January of 2012, I took a workshop entitled ¨The Science of Luck.¨ My big takeaway from this workshop was something the lecturer said about gold. He said that what makes gold the most precious metal and the reason it is the standard from which every other metal is measured, is the fact that gold has no resistance.

That means, he explained, that gold can be whatever we want it to be. It can be made into bars, it can be so thin you can use it on paper, etc. He said that because of its purity, having no properties in it that weaken it, it is the strongest metal on earth.

I decided after that workshop that I would become an alchemist and:

Create gold in my life by letting go of resistance!

They say, be careful what you ask for. El Camino has given me so many opportunities to practice. I have decided that, for me, El Camino has shown me that its power lies in the fact that it will be whatever we choose to make it.

For example, I met a man along the way who is an engineer and seems to be someone who sees the world in a particular way. We spent one day in a city together--he and his wife and I. During the course of the day, he fell three times. 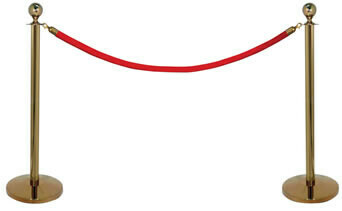 Once, we were going to visit a castle and there was a roped off part with those brass poles and the thick red rope, letting us know we shouldn't cross over a certain area. He was walking and suddenly he fell pushing the poles and the rope, knocking them over. We realized there was a step there and the rope was to protect us from tripping backwards and falling. His response when he was up again, was that there should have been a warning letting us know that the step was there. We then went into the castle to see a lovely exhibition and he tripped over a bench that was placed somewhere and his response was "that bench should not be there." 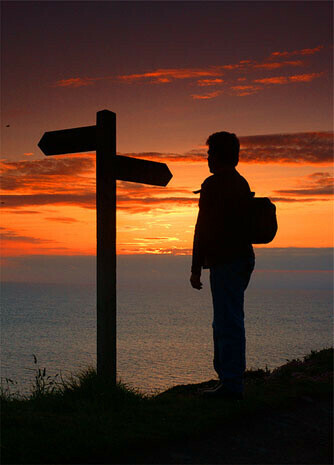 It reminded me that El Camino is not about how we think things should be, but rather what is and how we respond to what is. I realized choice is so much more than picking from what we like or don't like. It is also about choosing from what is and finding ways to work with what is by either accepting it or changing it.

I sat at dinner across from a woman from Holland that I asked, "So why are you doing El Camino?" She looked at me and said "I really don´t know. This is my 4th time doing it and I'm miserable. I really don't want to do it, but it has become an addiction." I thanked her for being so candid and thought, wow! This is her camino. I have met people who think El Camino will bring magic into their lives--excitement, love, distraction, solutions to their problems. In this way, El Camino is gold because it is whatever we choose to make it. 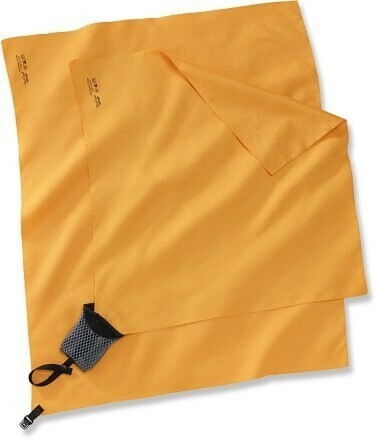 Speaking about resistance and having opportunities to practice, I bought one of those microtowels at REI because it is light and is supposed to dry quickly. Well, the first time I used it, I was dismayed to experience that when I dried my arm, or a leg, it collected the water and then kept it so that when I dried the other arm, all the water was transferred to that limb. It was not very good. But I have been using it.

Sometime ago, I did my wash and here in Spain, we hang everything outside to dry. Somehow, when I picked up my wash, I left the towel behind. I got to the next village and went to shower and I had no towel.

(The drill of the day is that we get up early, start walking and when we get to our destination, the first thing we do is register, get our credential stamped and go and have a shower before eating or doing anything else).

I had no towel, therefore no bath. I went into the place where they served food and asked a lovely young woman if there was a store where I could buy a towel. She looked at me and said, "we have no stores in this town and there is no place to buy anything." I asked if perhaps I could buy a towel from the albergue and she said "we have no towels to sell you." I thanked her and I can say that I was not upset as I said, "well, I guess today is a bathless day and smiled." She shrugged her shoulders apologetically and I ordered some food. I thought, isn't it amazing. I have money and cannot buy a towel. I thought of my home and a closet full of towels. Suddenly, something as small as a towel was so important.

That evening feeling a bit self-conscious as I sat for dinner, I hoped I was not smelling up the place. I sat with a lovely Austrian couple and we ate together and somehow during the conversation I mentioned that I had lost my towel and hoped when I got to the next town I would be able to buy one.

The wife got up from the table, and came back a few moments later with a brand new towel, it looked like it was flannel and handed it to me and said, "This is your towel. We brought an extra one just in case, and now, I know it was meant for you." I offered to pay her for it and she said no, this is why they had carried an extra towel. 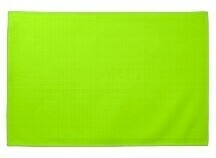 I took a bath that night and it dried me beautifully. I hung it over the foot of my bed and in the morning it was completely dry. It's a fabulous towel! I think European technology is leaving us behind. My REI towel didn't even come close to that towel. It doesn't weigh anything, it dries the body and it dries beautifully. 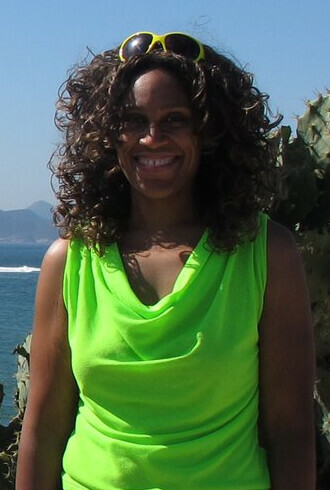 What's more, it is chartreuse! One of Rochelle's colors. I´m telling you, I am channeling my daughter on this journey.

(click on Rochelle's photo to the right to see her wearing a chartreuse shirt AND the yellow sunglasses she gave me ;-)

On one of my elevation walks, I sent my backpack ahead in order to be gentle with my knees on the descent, which was a good thing because I inadvertently took the most difficult of the three paths (the top line below) and I climbed and climbed and climbed all alone because everyone else took the gentler path (the lower line). (I later learned that people avoid that path because it is not well marked).

Anyway, I had a water bottle with me and as I pulled out the water bottle to get a drink, I dropped it and it rolled down the mountain. I had no water and thought, "Well God, I guess, I will manage without." As I was coming down the mountain and joined the road I should have been on, I met three young women who stopped to speak with me and I said, "How much further to the bottom?" They said 2 and a half kilometers. I knew it would take me a good hour at least to get down because of my knees and I guess I made a face. One of the women said, "Are you okay?" I said that I dropped my water bottle and it rolled down the mountain and two and a half kilometers felt like a lifetime. She pulled out a water bottle, a most fancy one with a filter and said, "I have not used this and I have plenty of water, so you may have this and you can return it to me at the next place we stop."

This is the way I am experiencing El Camino as I practice not resisting and trying to just be with what is. It's not easy, but I have this Metta that my acupuncturist, Amy, gifted me for my trip and it says:

May I be well.
May I be free of greed, anger and confusion.
May I be and feel safe.
May I be at peace.

I am trying to practice that when I sit at a table all by myself and wait 45 minutes to be acknowledged or served, while couples and groups get taken care of. I read it to myself when I am walking and wonder if I have missed a turn.

And so the learning curve continues and goes deeper and deeper.

I met a man in the middle of nowhere who has a stand where he welcomes pilgrims and provides refreshments for them and people simply donate whatever they feel for coffee, water, juice, cookies, chocolate, bread. When he saw me coming he said, "Eres Cubana?" (Are you Cuban?) And I said, no, but Cubans and Puerto Ricans are cousins. We share so much culturally.

Anyway, he told me his story. Four years ago, he walked El Camino and returned and decided his work would be to create a refuge for pilgrims on their way far from villages and any place to rest. He has been doing this since 2009 and this is his life now. There are so many stories like this. A young man who did my wash and when I asked him what I owed him, he said "Nothing. I am a volunteer and it is my joy to serve the pilgrims in this way."

And as I climb, I think of my Seattle sister, Jean, who takes these trips to places where she climbs these mountains and I feel that I am standing on her shoulders and she helps me climb. 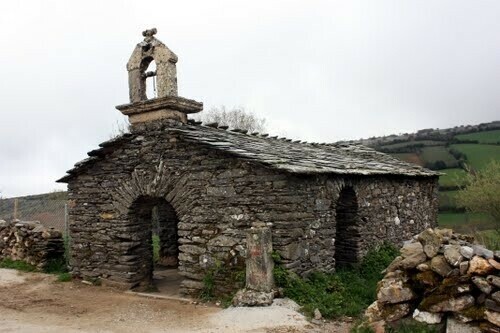 I will write about the places I've been since leaving León, in my next Epistle. I haven't written because internet connections are impossible in the small towns and I have been staying in small places. But today, I am staying in a place called Biduedo with no wifi. So I can't connect with Hart, but they have this one computer where one can connect with the internet and I am writing even though it's expensive. But what is expensive? One can have money and not be able to use it. No towels. So having money and being able to connect with you this way is wonderful.

I continue to give thanks for your amazing support and encouragement. There are days when all I can do is put one foot in front of the other and not think about distance or how much I miss my family and friends. But that, too, is part of the journey. I am learning to give thanks for all of it. Until soon,