It is Saturday, June 1st, I am two days into my fourth week on El Camino de Santiago and I am in Leon, just beyond the halfway point to Santiago!!!

The weather is sunny and about 68° F (20° C). It is finally warming up and I am keeping my fingers crossed that as I go towards Galicia it will not be too rainy. Everyone is telling me I am going into beautiful country, the most beautiful part of El Camino.

The last time we spoke I think it was from Castrojeriz. After I left Castrojeriz, I had to go over a mountain and that meant going up, up, and then straight down. They haven't yet built a tunnel for the pilgrims to go through the mountain. 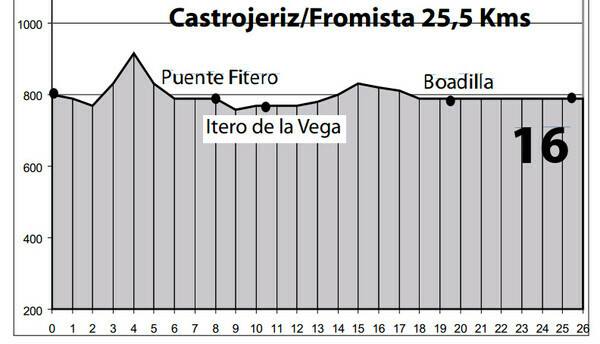 In any case, going up is never a problem. I paced myself and using my poles started climbing and was able to get to the top without stopping once, and was never out of breath. The road was paved and people were complaining that walking on a paved road was really hard. Being a city girl, tar and concrete are not intimidating for me, that´s where I am at home.

Going down, however, was a different experience. I started descending very slowly and my right knee was excruciatingly painful. I thought, this is going to take a very long time. Five minutes into my descent a man came along and said,

"if you go backwards, especially since this is paved and you don't have to worry about stones and too much unevenness, it will be easier on the knees and you won't feel any pain in your knees."

So I turned around, faced the mountain, and started my descent backwards. Sure enough, the pain in my right knee was gone. I had been at this very slowly for about 5 minutes when along came the Polish couple I had met earlier on my journey from Silesia where Hart was born. They came right at me, the wife said "give us your poles," the husband took one and the wife took one and then they locked elbows with me on either side, me facing the mountain and they facing downhill and they said "Let's go." I stepped backwards and I have to tell you, I have never back peddled so fast in my life. Before I knew it, we were at the bottom of the mountain and I was pain free. They then gave me back my poles and continued on their way and I on mine.

Later, as I reflected on this experience, I thought that it was very generous of them to offer to walk me down that mountain because had I stumbled or fallen, I would have brought them down with me. They are a couple in their late 60's or early 70's. I also thought that this was another opportunity for me to trust, to let them be my eyes and to follow even if I couldn't see where it was taking me. It was also another opportunity for me to practice receiving unconditionally and to go with the flow. It was an amazing experience. 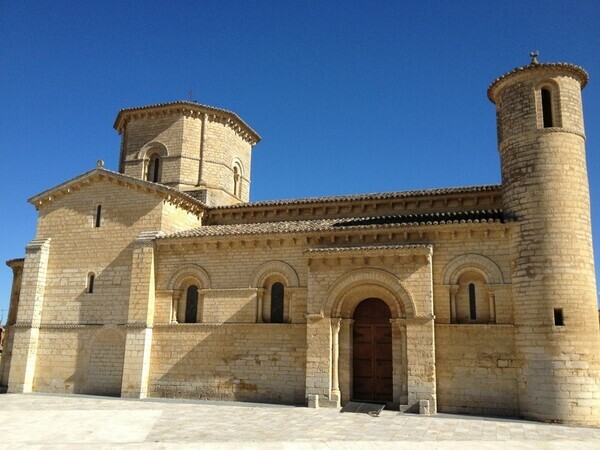 I arrived at a tiny little town and found this incredible jewel of a church. It was a very small church from the 10th century, in Gothic and Roman architectural style. The caretakers were husband and wife and the husband said that a sarcophagus (I can't tell if I'm spelling it right because this is a Spanish computer and every word in English is underlined in red), was found under the church and that the bones dated back to the Visigoths.

Anyway, it was so beautiful and peaceful in this little tiny cathedral that I decided I would sing in front of a beautiful tryptic and I sang "Yo Maestra," the song that I want my dear friend Madelyn to sing at my memorial service. It is in Spanish and it says something like, "because in my voice there are echoes of lullabyes, because my palms carry the validation of the cross, the Divine Master ripened the seed in me. When my pencil trembles in my hand and I reach the end of my days, I will lie in the shade of the walnut tree and be redeemed."

Here's a lovely video / recording of Yo Maestra:

The accoustics were unbelievable and I thought, to sing in this place is one of the blessings my pilgrimage is gifting me.

Some cities are more welcoming than others. There are places where I feel that people find us a nuisance and an interruption in their daily lives, while other places make us feel that we are loved and appreciated. Carrion was one of those towns where we were welcomed very lovingly. All the eating places served food all day so the pilgrims could eat whenever they arrived. We all stagger in at different times. 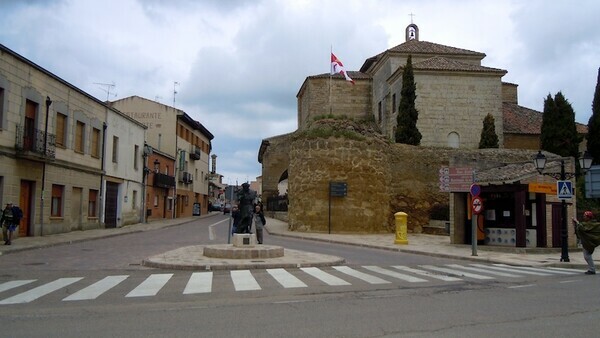 I went to a Mass in the evening and after the Mass, the priest asked all the pilgrims to come to the front. There were about 50 of us and one of the nuns called out countries starting with Spain and asked us to raise our hand when our country was called. She went through all the European countries, and then asked us to call out our country if it wasn´t named. Of course Puerto Rico was not one of them, so I very proudly raised my hand and said Puerto Rico, someone else raised their hand and asid Thailand, Korea, etc. When everyone had been identified by country, the priest asked us to come up and one by one, he put his hands on our heads, blessed us and wished us a Buen Camino, then the nun gave us a paper star and we all did this until the 50th person had been blessed and then the nuns sang a song for the pilgrims and we left. It was very moving, especially because many pilgrims did not speak Spanish. But that did not matter. The spirit was so wonderful, we all understood heart to heart. 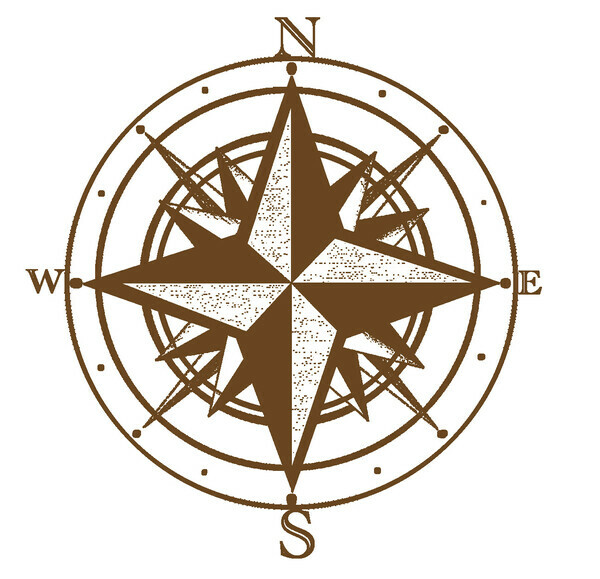 I am getting very good using my poles. Duh! I guess after practicing daily for 3 weeks that should be no surprise. It really is like having four legs and the knees are very thankful. It takes a lot of strain off the knees. I am also reading maps and finding my way using the four directions of the earth, N, S, E, W. Hart will tell you that I am a turn right, left, straight ahead kinda gal and when someone would say, it's on the northwest corner of the street, my eyes would glaze over. So I am developing some navigational skills, which I suppose is a good thing. Let´s see how long that lasts once I am back.

I continue to meet amazing people along the way. I am finding that taking time to speak with the locals when I go in a bar to get a hot chocolate or something to eat, provides a different kind of nourishment that is priceless. 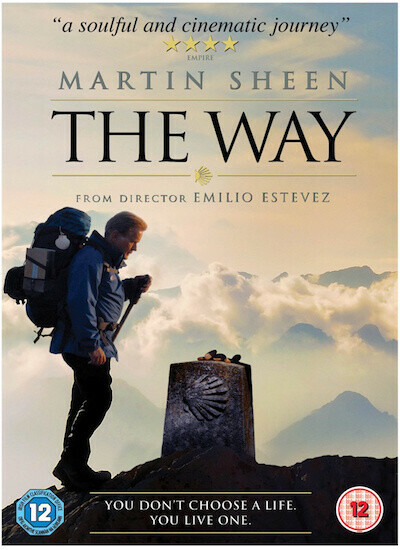 I stopped at a bar and asked if I could have an omelet because the breakfasts here are just bread, jam and butter and coffee and I need protein in order to get through the trek. The cook made me a cheese omelet and I thanked him for going to the trouble to make it up for me and I said that I couldn´t have made it any better. This opened up a chance for us to speak and he said that The Camino has changed and it really saddens him. He said young people do it because they are unemployed and it is a cheap way to spend time because they spend very little staying in Albergues and there is always a peregrino menu that is very inexpensive and they can survive with bread, cheese and one peregrino meal a day. He said that the Martin Sheen movie, The Way, has brought awareness to people who are lonely and looking for a way to meet people and it is not always about having a transformative experience. We had a situation where a German man came up to a woman who was traveling alone, showed her a broken credit card and said he was in dire need of 300 euros to be able to get back home. She gave him some money and then we later heard he did this to other people as well. So he was using The Camino to live off others. We have to be aware that this is life and the good walks together with the bad.

I was in a store yesterday where an 80 year old woman came in to buy something and sang for me a beautiful song that she was singing in Mass because it was May 31st and there was a special song that is sung to the Virgin Mary on May 31st. So I stood as she held my hand and sang to me. Afterwards, we hugged and kissed and she wished me a wonderful Camino. 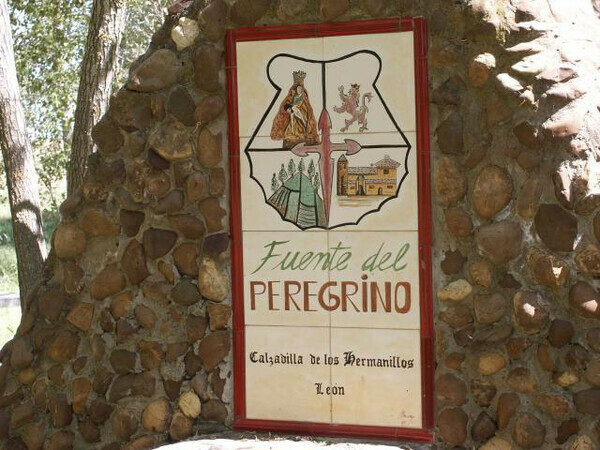 Yesterday, as I walked from Casada de los Hermanillos to Mansilla, I walked the Roman road that has been the pilgrim's camino for over 2,000 years. I walked all alone with no one in front or behind me that I could see and I thought, how many feet have trod this path, how many stories these stones have heard and it was very humbling.

One mundane story: I have been trying to stay warm because it has been unseasonably cold. The Spaniards are saying that they have not experienced weather like this in 80 years. So I decided that since I was in Leon, I would find a comparable REI store and buy one long sleeved warm t-shirt because I only had one to walk in and one which wasn´t quite so adequate to sleep in. Sometimes the albergues are freezing and I have had to sleep in the top that I will walk in the next day. So I found a store specifically catering to mountaineers and having things comparable to REI. I complain that REI is so expensive. But I bought a light merino wool long sleeved crew neck top and I paid 76.50 euros which is over 100.00 dollars. I will never complain about REI again.

I will stay in Leon today and tomorrow and resume walking Monday morning June 3rd. 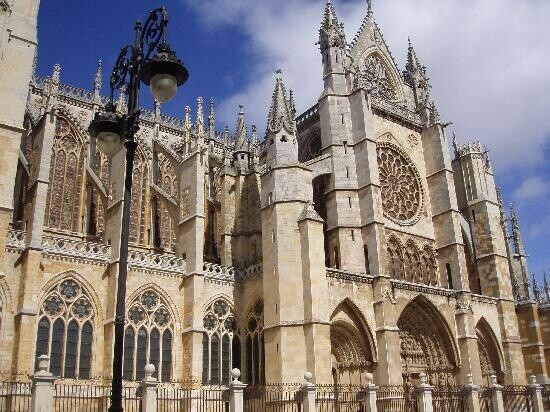 I will visit the Cathedral and tomorrow I will go to Mass and have a rest day. Your emails continue to be the wings that spur me on as I wander in wonder.

Thank you, thank you for your love and support,