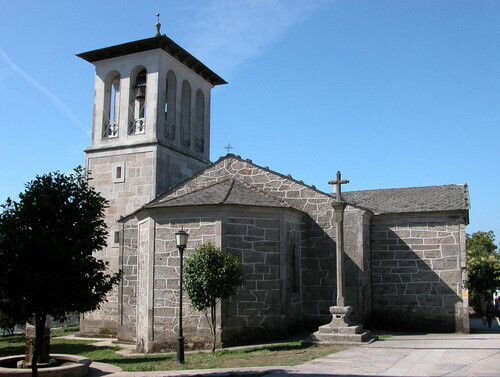 Today is Thursday, June 13 and I am in Palas de Rei.

I have a little cold. I am sniffling and my body is sluggish. This is not surprising for me because in 4 days, I will be in Santiago. After having worked so hard to achieve this goal, my body, my mind, my spirit are all asking the question....what now? It is scary to work for one and a half years to achieve a goal and suddenly realize that goal will shortly be successfully achieved and wonder where do I go from here?

Nevertheless, it is good to know that this cold is NOT about not having washed my hands properly, picking up someone else's cold, having pushed myself too hard, not getting enough sleep, having a compromised imune system, and on and on. It is all about my fear of:

It is the realization that every experience imprints itself in our being and produces consequences.

What is helping me as I work through this cold is the fact that the closer the date got for the start of my journey, the more nervous and scared I got. I worried about:

All of those worries proved themselves wrong. I can say that almost everyone was considerate, generous, very clean. The places I stayed in were almost without exception wonderful. My body, even with the knee problem, performed beautifully. Everything I needed was provided for.

So I think, my ego is showing up with its silliness, something I have experienced throughout the journey. 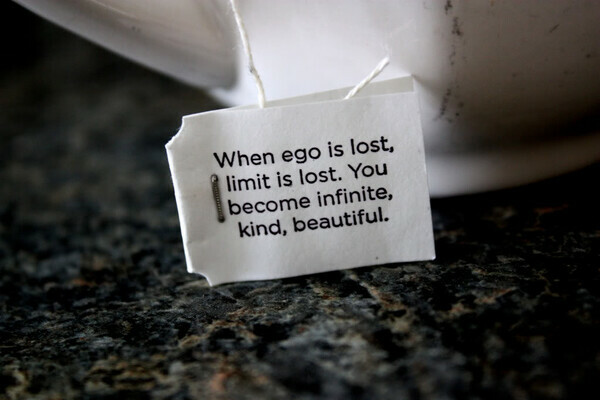 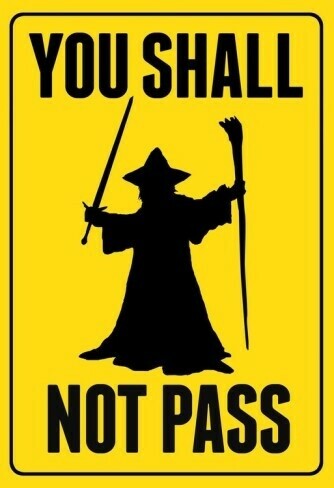 Speaking about the silliness of the ego, it was amazing to see that if I came upon another pilgrim on the trail and was walking so that I wanted to pass them, they invariably sped up because they did not want to be passed. I found myself doing the same thing. What is it about our pride that to be overtaken and passed seems like a sign of weakness or failure?

I have to tell a very particular story. When I left La Portela de Valcarce on my way to O Cebreiro, there was a trail for the pilgrims and a road for the bicyclists. The trail for the pilgrims was more rocky, undulated a bit, so there was lots of up and down before the steep climb from 600 meters to 1,300 meters. As I have told you, I'm a city girl and I love pavement. I find it amazing that the cell memory in my body associates pavement with my New York growing up years and how I ate up that pavement.

In any case, when the road divided and the pilgrims went on the earthy, rocky, stony path, I chose to go on the pavement with the bicyclists, even though it meant an extra 3 kilometers. 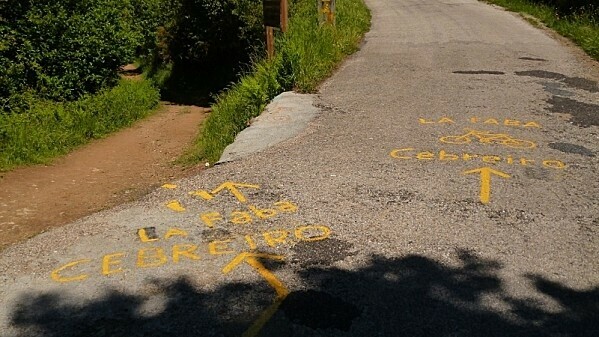 My friend Peggie, who is a serious mountaineer, said to me that it is all about pacing oneself. So I started to climb at my turtle pace, but doing it very steadily, letting my poles support me and I felt great. Along came this German man (I guess around 60 years old) and greeted me "Guten Tag" as he passed me on his bike. Soon, I noticed his bicycle started to wobble; he could not go fast enough to really climb. So, he got off his bike and started pushing it up. 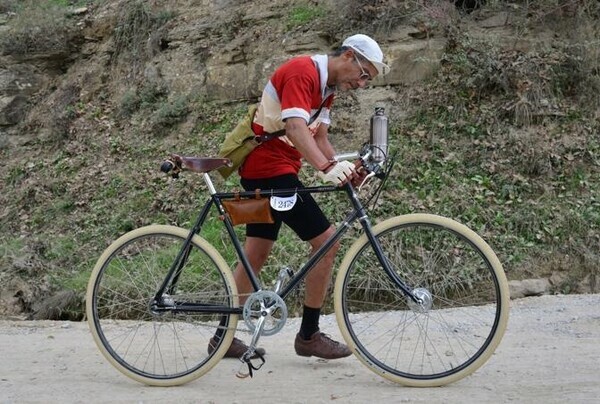 Other bicyclists came along and passed him on their bikes, which seemed okay with him. However, every time he looked back and saw that I was gaining and getting closer, he would push harder. Mind you, I was the only walking person on this road. Soon, I could hear him mumbling to himself. I just continued at my pace and I would shorten the distance between us. At one point, he was so frustrated that he yelled. This went on for maybe an hour and a half. Finally, as we were getting close to the top, there was a place where the road leveled out and he jumped on his bike and pushed himself out of distance.

I was so glad he was gone because I certainly did not need to deal with road rage between a turtle and a slow bicyclist. Sometimes, he was so red I thought, "Please Lord, don't let this man have a heart attack and keel over. What will I do?" Afterwards I thought, the silliness of the ego. It would not allow a man to be passed by a woman. Enough of that.

Galicia is breathtakingly beautiful! For the first time on my journey, I am homesick because parts of Galicia remind me of the northwest--especially Western Washington and Canada as one travels the Canadian Rockies. It is incredibly green and the rolling hills, mountains, rivers are a feast for the eyes. My friend, Maria, comes from Galicia and I understand well why she lives in Western Washington, although Galicia is 10 times more beautiful.

Yesterday, I left Sarria and walked to Marcadoiro. It was one of the most beautiful walks I have had on El Camino. Walking through the woods on beautiful paths, the trees forming an arbor and because it was a lovely sunny day, the sun dappled through the trees on the path making it look like a bridal path bedecked with sparking jewels. 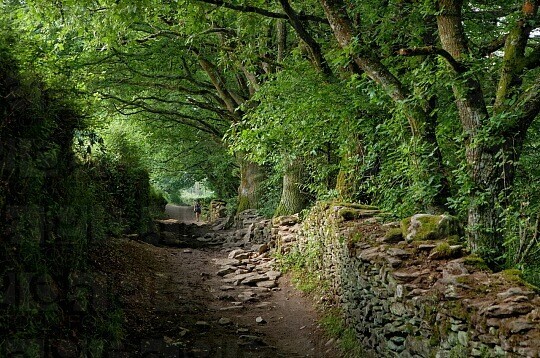 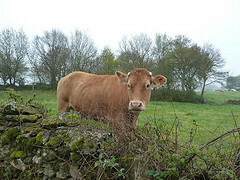 In Marcadoiro, I met a farmer who took me to his cow pasture, where I saw all these cows in their own environment, really up-close and personal. Can you believe it? Me socializing with cows? I told you, I definitely am not a picture taker, but I took a couple of pictures of those cows. Navigating the cow pies was something else again. But hey, I did it!!

I want to talk about leaving Sarria. I have been trying to leave the places where I spend the night by 7:30, and certainly no later than 8:00, so that I can get an early start and arrive at my destination around 2:00. I got up at 5:45 a.m. yesterday and I have become quite efficient with my rituals in the morning and was able to speak with Hart from 7;00 - 7:35. Then, I went down to have breakfast and thought, I will be out of here by 8:00.

Well first of all, it was almost like an American breakfast. They had hard boiled eggs (and I mean hard boiled), cheeses, cold cuts, cereal, fresh squeezed orange juice, delicious bread, croissants, and even a gorgeous looking cake, coffee and hot milk for hot chocolate. When I saw that I thought, "I am going to sit down and eat and not just grab something and dash." So I sat down and had a lovely breakfast. The woman who was in charge came to me and said, "You must try some of this cake. I made it myself." So I had a nice slice of cake. Then along came a lovely French woman I had met one day, when we were all alone on the path, and we spoke and I asked how she was doing and we spoke for about 10 minutes. When I was getting ready to leave, the woman of the hotel came and said, "I want to give you a hug." I did not leave the hotel until 8:30.

I started on my way and as I was walking, I must have seemed a bit hesitant, or maybe it was part of the plan, because this couple was sitting on the sidewalk drinking coffee outside a bar and the man said to me, "You are doing El Camino. This is the best way to access where you want to pick it up." We then spoke about how long I had been walking, where I began, and we chatted. By the time we finished, it was 9:00. I was finally on my way. 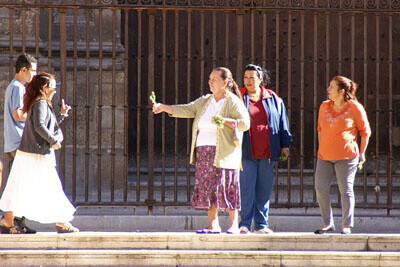 About an hour and a half into the trip, I was walking in the beautiful shaded woods (I always walk on the left side so that I can see upcoming traffic since sometimes cars are on the path) when I saw these two women who looked like gypsies coming towards me. One was on the left side walking towards me and the other one was on the right side. I continued to walk and we were almost colliding and I realized she was not going to yield, so I moved to the center to pass her. She moved to the center and showed me a piece of paper and she had a pen and she wanted me to sign something. I said "no gracias" and of course, realized that I was in a vulnerable position because the other woman was on the other side. She was insisting, when suddenly two tall guys came up behind me and said "no gracias" and we all moved between these two women and continued on.

I reflected on that experience and thought about how that all played out. I left late enough that those two men were walking when I was walking. I thought that, in the future, rather than moving to pass two people who can flank me, I should have stood and waited for the woman to pass me. I also thought how many times during the day are we cared for and removed from danger, whether it is that we pause and suddenly, that bicyclist we had not seen whizzes by, or we are held up at the office and there is an accident that we would have been involved in had we left earlier, or whatever. It made me thankful for this time without the daily distractions where I can pay attention to the way I am so beautifully cared for. I believe, it is the same for all of us, when we don't try to force things and go with the flow.

Today was a tough day, first because of this cold, second because it was rainy and not much fun to walk. I walked from Marcadoiro through Portomarín and believe it or not, going downhill was so much easier.

Tomorrow, I go to Ribadiso (B). Saturday, I will be in A Salceda (C), Sunday in Vilamaior (D) and Monday morning, I will leave extra early so I can be in Santiago (E) for the midday Pilgrim mass.

After that, we shall see what happens. I will try to write once I am in Santiago, for the last time.