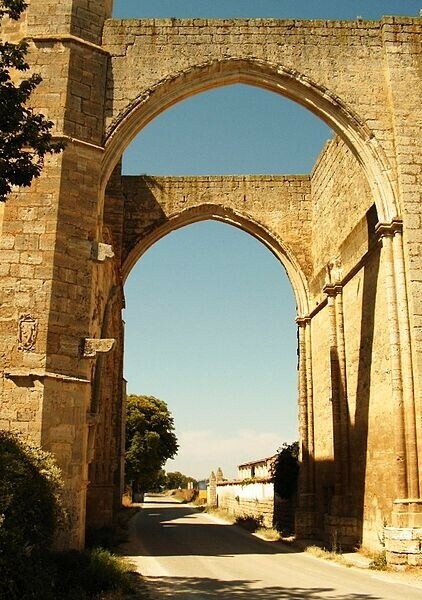 Today is Saturday May 25th 2013 and I am in Castrojeriz. It is sunny and beautiful even though it is still quite cold. This morning when I left Hornillos it was about 30 degrees farenheit and my hands were frozen as I held my poles even though I was wearing gloves. 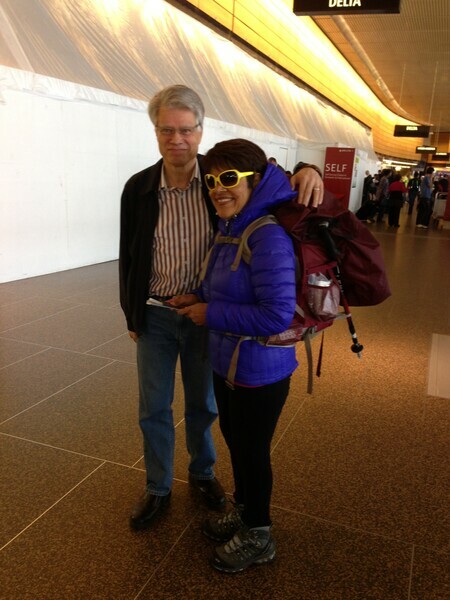 So much has happened since we last spoke. But I want to go back to when I left Seattle. On the way to the airport I suddenly gasped and said,"Oh I forgot my sunglasses." My daughter Rochelle said "Here you can take mine." Well hers are a bright canary yellow. Those of you who know me know that I don´t own anything, and I mean nothing, in yellow. So I took her sunglasses because it was a little like being a bride--something borrowed, something blue, and I certainly had things that I was taking that had very sentimental meaning. (I will speak about one of those things later.)

Anyway, I took her yellow glasses and had my picture taken at the airport as I was leaving wearing Rochelle's yellow sunglasses. She posted it on Facebook, so you may go into Facebook if you want to see what I look like with yellow sunglasses (see photo to the right).

It has turned out that I am known as "the girl with the yellow sunglasses." Guys comment that they are really cool sunglasses. Women say, with your electric blue coat, your red gloves and those yellow sunglasses you are so colorful! I guess I am channeling my daughter on El Camino because heavens knows, I am very conservative when it comes to dressing. Even as a 3 year old Rochelle would dress herself with a pink pokadot top and orange stripped pants. This was way before those colors together became fashionable. I would despair, but I let her be. She´s still doing it, but I no longer despair.

The other morning as I came down to breakfast, someone asked me if I was a cyclist because I was wearing one of those Nike tops that are supposed to keep the water off your skin and keep you dry. I had to laugh because I can´t even ride a bike. Growing up my grandmother wouldn't let us girls ride bikes because she was afraid that if we had an accident on our bikes we might break our hymen (is that the correct word?) and then we would not be virgins anymore. Can you believe it? But it made my day to have someone ask me if I was an athlete. My body is really getting toned with all this walking. There are many bicyclists on El Camino and there is a group of four that when they pass me they say "Hola, Morena," or "Adios Morena." Morena is an endearing word in Spanish that means dark one.

El Camino is a journey full of paradoxes. The darkness walks side by side with the light. Lest you be under the impression that it has been paradise for me, I want to share an experience that gave me pause, but that showed me that whatever circumstances I find myself in, I will be taken care of.

I had stopped at a town along the way to eat something and was leaving around 2;30 in the afternoon. I got a little lost leaving the town and saw an old woman hanging clothes from her second floor patio and said to her "Senora, can you tell me if I am going in ther right direction for El Camino?" She said, "give me a moment and I will come down and show you where you need to go." She finished haning up her clothes and then came down and walked with me to where I would take the path out of the village to be on my way. Just as I was getting ready to get on the path, a young couple came along. They seemed to be speaking Czek and spoke no Spanish. They spoke some English and wanted to know where they could find a Super Market. The old lady didn´t speak English so I stopped and served as translator and she told them where they could find a store. I went on my way-

I had been walking about 45 minutes and was deep in the woods--I had to go about 9 kilometers to get to the town where I was to stay. Suddenly I saw this man walking towards me. He was sort of ambling along, did not have a backpack or anything. Just seemed to be strolling. I had a very bad feeling because we just don´t exprience people coming on the path in the opposite directions. When we do, it is usually very close to town and they are either walking their dogs or jogging and when they pass us, they will say "Buen Camino." This man (he was in his late 20s early 30s) did not make any eye contact, did not say anything and just walked past me in the other direction. I started praying and said, "God, surround me with light and let me be okay." I kept walking and about 10 minutes later the young couple came walking past, they said "Buen Camino and continued on in front of me. About 10 minutes later the man who had passed me was behind me and then caught up with me and walked a little ahead of me. I slowed down to keep him in front of me and he continued very slowly. We went like this for about 15 minutes and then lo and behold we came upon the young couple who had stopped on the road to our left and were eating some of the food they had purchased. The man in front of me started walking very fast and soon he was not to be seen. I continued on my way and by the time I reached the town the young couple had caught up with me and passed me into town. I don't know if they were sent to be my guardians, but I can tell you that I have not seen them since and pilgrims are always running into each other. So I felt God's protection that day and I also wear a very old cross that my Seattle sister Dianne gave me to wear on my juorney. I feel that cross is my shield and protects me. Several women have been robbed and have had traumatic experiences along the way.

And talking about that cross, last night at dinner a man sat at my table and said "so you´re the nun." I was taken aback, because I have never been described that way. Apparently, there's a nun on El Camino and when he saw my cross, he decided that I must be the nun.

It has been unbearably cold and many people came unprepared. On our way to Najera we experienced a hailstorm that was quite dramatic! Everything is green because of the amount of rain, so it is incredibly beautiful. Going through wine country is breathtaking. Now that we are out of Navarra and into Burgos country on the way to Leon the terrain is very different.

Going through the meseta was amazing. It is an ocean of green on either side with this small road in-between and the green and the sky create a horizon with nothing else for miles. You have to be sure and pee and not drink too much water, because there is no place to stop and pee. I felt like I was in the middle of this vast world with nothing else as far as the eye can see.

Burgos is a beautiful, big, sprawling city. I spent an extra day there so I could do some sight seeing. I visited the Cathedral, which is absolutely beautiful.

I also visited the Monastery of Las Huelgas. 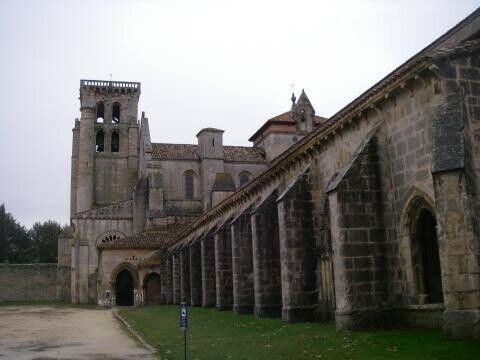 But my highlight was eating at a restaurant whose owner is a woman from Venezuela. She has a piano in her restaurant and I got to play and sing for her and we had a wonderful time together.

Leaving Burgos, I ran into a Polish couple and when I told them that my husband was born in Silesia the woman lit up and said, "we are from Silesia." It´s really a small world.

There is so much more to tell, but I will wait until next time because this internet cafe is expensive. One euro for 15 minutes, and I have been at it much longer than that.

Thank you all for your emails, for your prayers, for your love and for being a part of my journey.